Why write yet more books? By Cecilia Busby

Sometimes as a writer I feel a sense of despair about what I do. Can I really - should I really - continue to add to the vast quantities of books out there already?

I feel this as a twinge at the back of my neck when I read otherwise lovely and welcome posts on Facebook about friends' book launches and reviews and interviews; I feel it when I browse the reviews of new books online, or click through from Twitter to notices in the Bookseller about the latest signing or new shortlist; but most especially I feel it when I walk into a bookshop. What used to be a very pleasurable experience has become tainted by the fog of despair that descends when I stand in front of the bright and wonderful children's and YA bookshelves of almost any bookshop - but most especially Waterstones, which has limited space for kids' books and fills much of it with swathes of Enid Blyton, Roald Dahl, Michael Morpurgo and Jacqueline Wilson (to say nothing of Beast Quest and Rainbow Fairies). 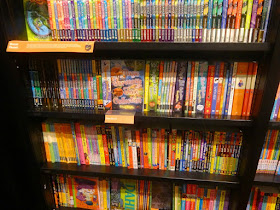 The despair is a mix of: 'what's the point? there are so many good books out there already - from years ago as well as last week - and more piled on top of them every day' and 'what's the point? you'll never get your books on the shelves anyway because you're not a celebrity/haven't won any prizes/don't have a massive marketing campaign behind you/(and aren't any good anyway)'... (this last said in sepulchral tones by the doubter that sits on my shoulder and criticises everything I do - you know the one I mean, I'm sure...) 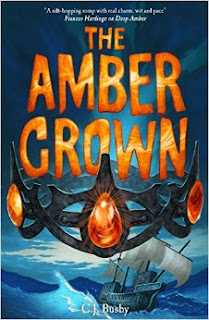 Up to now this despair has been mitigated by the fact that I have to write a book, because I have a contract to do so, and the question of whether or not it's a sensible thing to be doing can be passed off on the publisher who commissioned it. But my latest book, The Amber Crown, was the last in a trilogy, and since my publishers, Templar, have closed their children's fiction list and their sister-publishers (Hot Key and Picadilly) are not currently in the market for MG fantasy, I find myself looking for a new home.

Which means I am considering quite seriously what to do if my current WIP (an MG fantasy involving a box of action figures purchased at a car boot fair who turn out to be the Norse gods) finds no favour out there in the harsh world of children's publishing. Do I persevere? Do I really believe the world wants or needs another children's book? Do I feel a burning desire to fight it out there with all the other excellent MG books in the pipeline or already published, many of them - good ones, too! - languishing unreviewed and unavailable in bookshops, with paltry sales figures and no marketing campaign?

In the UK, according to recent statistics published in the Guardian [here], we publish more than 20 new titles every hour. That means more books per inhabitant than anywhere else in the world. As Jamie Byng, at Canongate, noted:


“I think we publish too many books ... and I think this impacts negatively on how well we publish books as an industry. It is very easy to acquire a book. Much harder to publish it successfully."

I think that's true in the children's book world as well as the adult. Just how many books can children read between the ages of 5 and 11? (Children, remember, with the competing demands of electronic media, organised activities and much more homework than we ever had to do...) I want them to savour the delights of C.S. Lewis, and Alan Garner, and Diana Wynne Jones, and Susan Cooper - as well as new delights from the likes of Frances Hardinge, Garth Nix, Jonathan Stroud, J.K. Rowling. And that's just the fantasy. I also think most kids enjoy Enid Blyton, do get a lot out of Michael Morpurgo, are going to want to try David Walliams or Wimpy Kid, not least because everyone is reading them - and I could go on for pages. 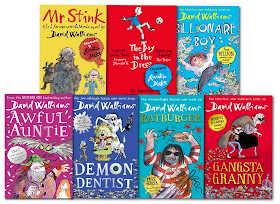 So what arguments could I bring to bear to justify continuing to write yet more books?

I'm not really sure. I am immensely proud of the books I have written, and I love them all. I treasure the reviews and letters from fans I have had, and I get a warm glow when I hear from people that their children have loved my books. The other day, in the library, I was accosted by an eight-year-old boy and his mother - he'd realised who I was and wanted to come and say my books were his absolute favourites but he was so overcome he was unable to speak until his mum had broken the ice first. These are very special moments and I'm so glad I've been able to experience them. I enjoy writing, I love making up stories, I have endless ideas bouncing round in my head, I can sense I am getting better as I write more, and when I'm not lost in the fog of despair, I do want to continue.

I don't know if that's enough justification - but you know what? I don't care. I'm going to ignore that sepulchral voice. I'm going to hang on in there for a little bit longer. Because when I really think about giving up, I realise that I still love being a writer, and I still get a kick out of the idea that someone, somewhere, is reading and enjoying words I've written. And that's enough for me. 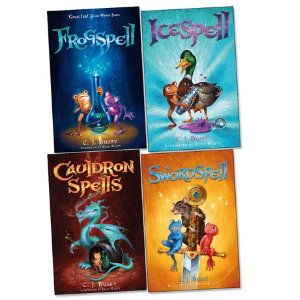 Her first series was the Spell series, an Arthurian knockabout fantasy aimed at 7-9. Her latest book, The Amber Crown, was published in March by Templar.